Tatyana is a classically-trained, Russian-born painter and a former instructor at the Florence Academy of Art in Florence, Italy, where she taught drawing and painting and soaked up the classical beauty for six years. She has had a passion for portraiture ever since her undergraduate study in Studio Arts at Queens University of Charlotte, North Carolina graduating with a B.A. in 2003. In 2001, Tatyana received a Sarah Toy Art Scholarship awarded to promising art students, and she used the funds for her first experience in the Academic Method at the Florence Academy of Art, Florence, Italy, as a summer student. Later she received her graduate degree, an M.A. in Arts Administration from Winthrop University, South Carolina in 2008. Tatyana spent 12 years living in North Carolina and still returns to Wilmington annually painting commissions and teaching master classes at the Cameron Art Museum (The CAM).

Tatyana is a prizewinner of the prestigious ARC student scholarship and the John F. and Ann Lee Stacey Scholarship granted to promising realist artists. Her work can be found in private collections in the UK, USA, Europe and Australasia as well as in the permanent collection of the New Britain Museum of American Art in New Britain, Connecticut and the Cameron Art Museum, Wilmington, North Carolina. Among recent showings are “The Royal Society of Portrait Painters Annual Exhibition 2014”, London, UK, “Chiaroscuro”, New York, NY, and “The Royal Society of British Painters Exhibition 2015” at the Mall Galleries in London where she has received the ‘The de László Award for Classical Draughtsmanship’.

After the birth of her second daughter Tatyana and her family chose to reside in New Zealand seeking new inspiration and a lifestyle close to nature. Tatyana now resides in Wellington where she paints commissioned portraits, studio works as well teaches painting and drawing in the classical tradition at her studio Anthesis Atelier. Tatyana was selected for the Parkin Drawing Prize’16 show and received a Nola Harford Memorial Award at the Peter Diog Cleveland National Art Awards’17 in New Zealand. 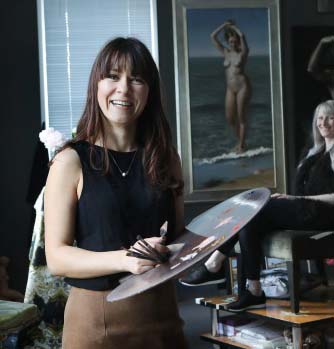